Environmental Defence issued a report at the end of December 2018 entitled “Carbon Pricing in Alberta – A Review of its Successes and Impacts”.

They paint a rosy picture, claiming:

“The aim of the levy is to reduce carbon pollution which causes climate change, while minimising any negative impacts to the province’s economy or to lower-income Albertans.” 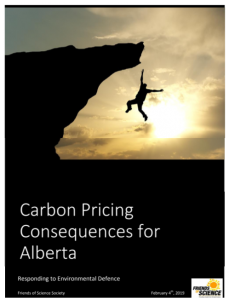 This report will demonstrate that Environmental Defence is misinformed and is misleading the public.

We will evaluate the billions wasted on coal phase-out, the continued downward-slide in investment, the faulty premises underlying carbon taxes and climate change claims.

However, no one can put a price on the human wreckage – the lives ruined, small business dreams on the rocks, farmers up against a financial wall, citizens sliding into heat-or-eat-poverty – all thanks to an imposed carbon tax burden and climate change plan driven by foreign-funded ENGOs, acting as proxies for green crony capitalists.

Do NOT follow this link or you will be banned from the site!