Robert Lyman is an Ottawa energy policy consultant, a former public servant of 27 years experience; a diplomat for 10 years prior to that.

Minister of the Environment and Climate Change Catherine McKenna recently published an article in which she argued that the economy and the environment go “hand in hand”. As evidence, she wrote that the “clean technology sector’ related to renewable energy is an immense growth opportunity for Canadian business, and that the federal government’s policy of imposing carbon taxes will contribute to economic growth. Throughout the article, she referred to carbon dioxide as “pollution”.

Statistics Canada does not include in its breakdown of Canada’s GDP any reference to “clean technology”. The notion that some energy sources are clean, and others not ignores the fact that all energy sources have both positive and negative environmental effects. StatsCan does however, report on two separate groups of economic activities: “clean energy and environmental goods and services” and “the environmental and clean technology products account”. However, most of the former category has to do with municipal sewage treatment, site remediation and environmental audits; less than $2 billion of the $14 billion annual income in this group is related to GHG emissions reduction. Of the latter category, which amounts to $59.3 billion per year, again only a small portion relates to GHG emissions reduction. When one examines the data, the environmental and clean technology products account actually has held a shrinking share of Canada’s economy over the last decade. What opportunity?

The international market for renewable energy technologies is not doing much better. Global new investment in renewable energy generation has been essentially flat since 2010. In Germany, the foremost European market for renewables, the megawatts of solar and wind generation capacity added annually dropped 90% in five years, and the largest German solar equipment manufacturer has gone bankrupt.  China, the world’s largest market for renewable energy, has just ended all subsidies for utility-scale solar projects; Forbes projects a 40% reduction in utility demand. In a global market suffering from massive oversupply, solar and wind equipment manufacture is perhaps the last market Canadian companies should be trying to compete in.

In Budget 2017, the federal government announced that it will spend $1.7 billion over four years on renewable energy research and development and another $2.4 billion over four years to promote the production and use of “clean energy”. This, along with the billions of dollars in past subsidies from provincial taxpayers and ratepayers, is not a guarantee of success, but rather a measure of this industry’s dependency on government handouts for its survival.

The notion that carbon dioxide, critical for existence of life on earth, is a “pollutant” is nonsense. Treating an odorless, colourless, benign gas that people exhale as a toxic “pollutant” would be the ultimate extension of intrusive environmental regulation.

Carbon tax rates in Canada are still relatively low – in the range of $20 to $30 per tonne. At this level they punish consumers but do not yet seriously affect the economy. To achieve the government’s climate targets for 2030 and 2050, however, will require carbon taxes as high as $200 to $300 per tonne, and destroy the economic viability of many of our energy-intensive industries in the resources and manufacturing areas. Proponents claim that the revenues will all be recycled by reducing the rates of other generally-applied taxes, but that has never been done consistently in Canada. International studies show that, in all the countries that have introduced carbon taxes, only 29% of the revenues were recycled back into the economy in the form of tax reductions. Taxing the most productive Canadian sectors and raising energy costs for Canadian consumers and firms to subsidize politically-favoured industries can never be considered as benefitting the economy. 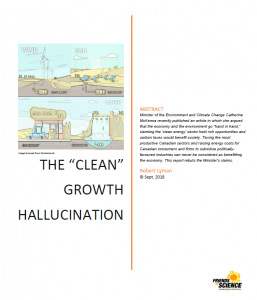 Regarding extreme weather claims by the Minister in the same article:

Millennium: An Assessment with a Focus on Worldwide Economic Impacts”

Dr. Khandekar:  “What Global Warming? How About Global Cooling?”